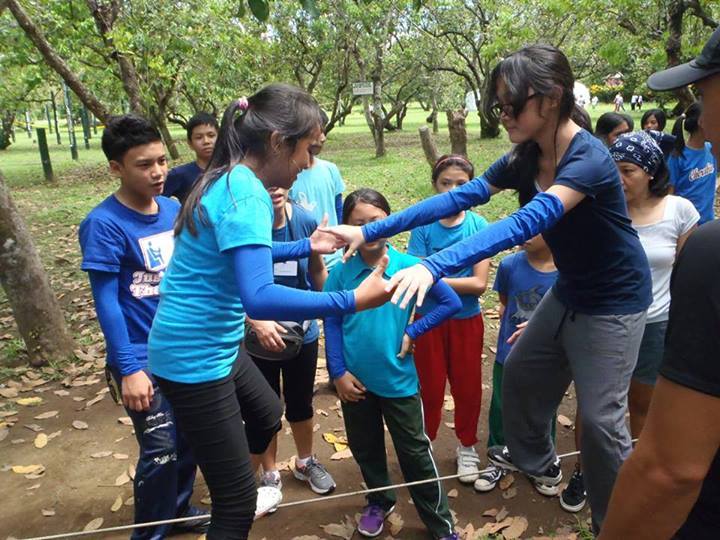 Life Lessons At Its Best

A two-day and one-night camp of the congregation's Pre-Teens Ministry was held last May 24-25 at Camp Allen, Sta. Cruz, Laguna. Over 180 pre-teens, aged 9-12 years old, from all over Metro Manila and nearby churches participated under the supervision of around 40 adults who served as pre-teens coordinators.

Led by Elmer and Badette Velasquez, the pre-teen campers enjoyed and experienced a series of team building activities, meaningful games, and memorable fellowship. Grouped into 10 teams with around 16-18 members, each team competed and gave their hearts and strengths to complete each task given to them. The different rope courses were a test of their bravery, such as the "Tarzan and Jane" where each member had to swing from one end to the other, the "chicken walk" where two kids facing each other had to walk past each other on two suspended wires without falling off, and the "swinging log", where the 12 members had to balance themselves in a log hanging almost 2 feet above the ground. They developed teamwork and understood the power of unity as they figured out how to surpass the "spider web challenge", the "human trolley", and the ball relay. Fun reached its peak as the campers rolled away inside the "hamster ball" and tried volleying a gigantic "earth ball" in a grass court. But their perseverance, patience, and coordination were called higher during the "traffic jam" activity and the "toxic waste" game where they were blindfolded while picking up glasses using fabricated strings.

Aspiring to reach greater heights through the zip line, rappelling, and wall climbing, the bravest of the lot took turns in showing what they are really made of. Being full of faith and trust in the stability of the ropes and in the guiding hands of the facilitators, they easily related these exercises and activities as to how they should put their trust and confidence in God in facing life's daily challenges. Saturday night was fellowship time as they gathered around a bonfire and shared their God-given talents while enjoying grilled hotdogs with marshmallows and bonding with each other.


Come Sunday morning, the pre-teens were given an opportunity to pray with each other and share their reflections during the camp.

Everyone had a joyful worship celebration with everyone being energetic in expressing their love for God. The camp culminated with a sharing time where representatives from all teams shared what they have learned and the characters they would like to work on. Tokens were given and medals were awarded to the top three teams who completed tasks the most within the least time possible.

During the free time, the campers enjoyed wading in the pool and continued to make friends and build deeper relationships with each other.

Some of the lessons learned from the participants themselves:

"I learned to be cooperative so that I can be useful to our team. I learned about trust and perseverance. All those things can be applied to our daily lives as Christians and for us to be fruitful in God's eyes." —Carlo Manalansan, AMS Region


"I have learned to face my fears." —Chelsea, Las Piñas Region


"What I learned from the camp is teamwork and leadership." —Joziah Bagasbas, AMS Region


"I learned how to be a good leader, a good follower, and a good listener. I also learned the value of patience. All these things I learned formed my character." —Thea Rafaella Laurel, AMS Region


"Never give up, keep on trying, and learn from our mistakes." —Zachary Santos, Las Piñas Region


"I learned to be obedient and brave." —Lana Buello, Las Piñas Region


"I also need to be brave, unafraid, loyal, and prayerful. I need to be more patient and forgiving when someone ticks me off." —Tyrelle Ty, AMS Region