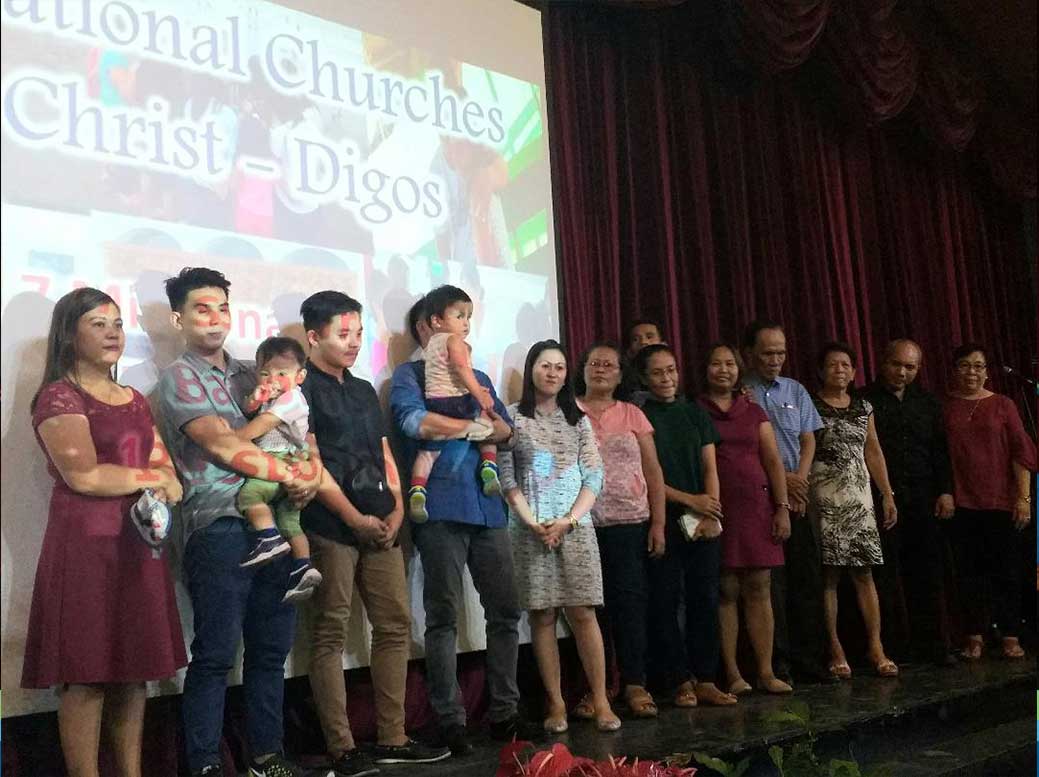 Davao City, Philippines — The International Churches of Christ (ICOC) Davao marked a new milestone after it sent off the seven missionaries for the ICOC Digos church planting in October during its 25th anniversary service at CAP Mini Auditorium here on August 25.


Mindanao Family of Churches Evangelist Ronald Mendres, who currently leads the ICOC Cagayan de Oro, presented the ICOC Digos mission team to be led by Nino and Lowina Mercado. Joining them are Digos City-based couples Matercillo and Trinidad Abalayan, who by the way are on their 70s and 60s already, and Christopher and Gay Abalayan with Devina Bautista, who is a teacher from Makilala, North Cotabato.

Mendres quoted Matthew 5:14-16 (NIV), "14 You are the light of the world. A city on a hill cannot be hidden. 15 Neither do people light a lamp and put it under a bowl. Instead they put it on its stand, and it gives light to everyone in the house. 16 In our u uthe same way, let your light shine before men, that they may see your good deeds and praise your Father in heaven" in his send-off message.

"This is God's dream for the lost and dark world. Sin darkens our lives and separate us from God. God send His light, through Jesus Christ to give light to all sinners. He sacrificed his only son on the cross for the forgiveness of all our sins - that out of gratitude will also make disciples. Disciples who will be selfless and choose to be the light, who are willing to give up everything, do anything and go anywhere for the fulfillment of God's dream. This scripture has been fulfilled here in Davao 25 years ago. Today, it will give birth to another church by planting ICOC Digos. To God be the glory," he said.

It can be recalled that since 2012, ICOC Davao disciples started visiting Digos City, the capital of Davao del Sur, which is an 90-minute bus ride from Davao City, since it is where the Abalayan clan, families of disciples, reside.

The Abalayans usually come to Davao City for Sunday worship services and hold their midweek devotionals on their own.

About four years ago, by the grace of God and the servant hearts of Tatay Max and Nanay Trining and Christopher and Gay Abalayan, who welcomed disciples and visitors to their home with the help of other family members and disciples based in Davao, started studying the Bible with their neighbors, relatives and friends. Services and devotionals were also held at the Abalayan residence.

As the Mercado couple led the weekly worship services in Digos this year and strengthened disciples there, God has blessed the ministry with four baptisms and one restoration the past four months including Adonis Abalayan, the second to the youngest of the seven children of Tatay Max and Nanay Trining, and his wife Sheila. Sheila's mother Anita also studied the Bible and got baptized.

All six of the seven children of Tatay Max and Nanay Trining - Eric, Alvin, Paz, Bernadette, Christopher and Adonis are all disciples and they are also married to disciples. However, most of them are based in Davao City.

Meanwhile, Reymart Nacion, an early convert of the Digos bible talk, was also restored and his wife Millicent was baptized a month later.

The Digos ministry currently has 14 faithful disciples whose faith and God's leading will spread God's Word to this city of about 300,000 residents as ICOC Digos will officially hold its inaugural service on October 6.

The ICOC Digos church planting is the second from an existing ICOC church in Mindanao. The first was ICOC Butuan by the ICOC Cagayan de Oro. ICOC also has churches in General Santos City and Zamboanga City with a ministry in Kidapawan City.